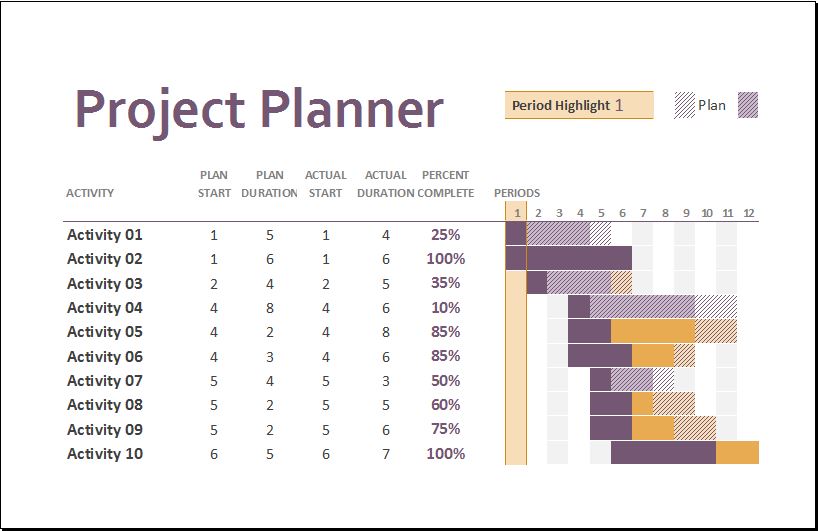 Running a business or being in the project management section, one is not unaware of the importance of project planners. Project planners help to decide and clarify details of projects before they’re started.

Their benefit is that when the project is fully planned, it is finished at the planned timings according to the decided conditions. Businesses today cannot think of initiating projects without making project planners.

The feature of these charts is that they are bar charts that illustrate the beginning and ending of the project, or in simple words the project’s schedule.

It may record other elements like the summary elements, terminal records or work breakdown etc. Though it is not an alternative to the project plan detailed files, it does nonetheless, help a lot while giving presentations to employees or introducing a project to a company.

Note that the purpose of Gantt charts is to record but they are not always used to record project plans. The very first time Gantt chart was used after World war-II to record human loss per country. Gantt project planners, however, are specifically used to schedule projects.

If you’re looking for project planner in order to schedule your upcoming project, Gantt project planner would help you a lot. Below is given planner template provided by http://templates.office.com for instant use. The good thing is that they are easily modifiable.

In 1910, Henry Gantt, an executive consultant & engineer, worked on Karol Adamiecki flow chart ‘harmonogram’ to aid the supervisors in assessing the next level of the operations and to keep in vision that the task was completing on time, lacking behind or advancing ahead of time

A Gantt chart is a graphical representation of which events or activities are plotted against time. It is a useful tool in project management. With a marked and set scale, the chart illustrated the activities on the left. A bar graph is plotted in a way that the position and length of the bar describe the starting point duration and the completion date of the specific activity.

It shows the work breakdown structure via summary elements and terminal elements.

Gantt chart tracks shifts, vacations or other types of office related timings. This chart is helpful to determine the type of activities, their beginning and ending time, their schedule, and the clashes of timings and the total span of the whole project.

The project has to be completed on time and for this, all the activities have to be done on their assigned time and schedule if it crosses the deadline then the business has to suffer a lot with more expenses that are why Gantt charts are drawn to check when and how each activity has to be completed.

The chart exhibit all the activities of the project in a sequential order.